Senku told his crew that when Stanley’s gang strikes, Petri Tower will switch on. Within a matter of 3ooo meters, one second, everyone will be petrified. But the one who will be hiding far away will return and revive the rest of the petrified crew. Ryusui comments that they have to finish fortification in time before Stanley shows up. Chrome is glad that Kaseki has managed to a medusa without breaking it. Kaseki remarks that it is all thanks to his guts.

But he has a mountain of failures left behind. Gen carries the medusa with his hand, suggesting that they can try to do what Joel has done. He realizes that when Joel removed and reinserted the diamond, it breathes a bit of life back into the device for a second. Ukyo comments that Joel is working on the new medusa. Kaseki tears off his t-shirt and he works with all his strength while showing his muscles. He realizes that they have to work hard and craft one for themselves.

Dr. Stone Chapter 186 will be available this Sunday, on 21 February 2021. Dr. Stone’s latest chapter is available on Sunday on Viz. New updates will be added after the latest chapter is released on their official platform. Let’s how Stalnely’s gang will arrive at the battlefield below.

Kaseki thinks that they have to craft a new diamond battery of perfect size and shape. At the same time, Joel is working with others who are just watching him. He notices that he has found the perfect match and size, but he will be the first guy to do it if he can make it. Joel thinks that it is just an ordinary diamond, but there has to be some difference. Senku thinks Joel the pro and Saseki will pull it off.

Senku started with pep talks and Chrome comments that in ten billion years, they will never hear encouragement coming from Senku. Luna comments that she gets the point and asks if Senku is some kind of monster. Ryusui said that Chrome is just telling the truth. Kaseki realizes that one small error can ruin the diamond, and he decided to be more careful. Chrome thinks that the batteries diamonds they are making are not that strong as solid.

Kaseki said that they are even more rigid than the one they found in medusa. He also said all they have to do is to ground in perfection so that they won’t crack. Xeno comments that an artisan like him would never make a cracked gem. He said he could only see cracks likely along cleavage planes. But he notices that the clean one has cracks. Kohaku and Kaseki are wondering why all cleaned diamond cracks in the middle.

The crew decides to fix those cracks, and they realize that it is a race against time. They suggest that someone has to hide far away from the fort. Taiju started to build a treehouse. They ask who will revive them after the battle with Stanley, and Suika said it would be her. They realize that Suika is good at hiding, and it will be safe for her from battle. Ryusui comments that they must not worry since Francois will assist Suika. Suika heads out to hide.

On her way, she thinks she will hide near the river and decided that she will go further since Stanely will reach their location by the river. Francois asks Suika if there is something wrong. Suika comments that she thinks she can see them at a distance. Stanley and the gang are hiding their boats using leaves, and they started to get out in numbers. 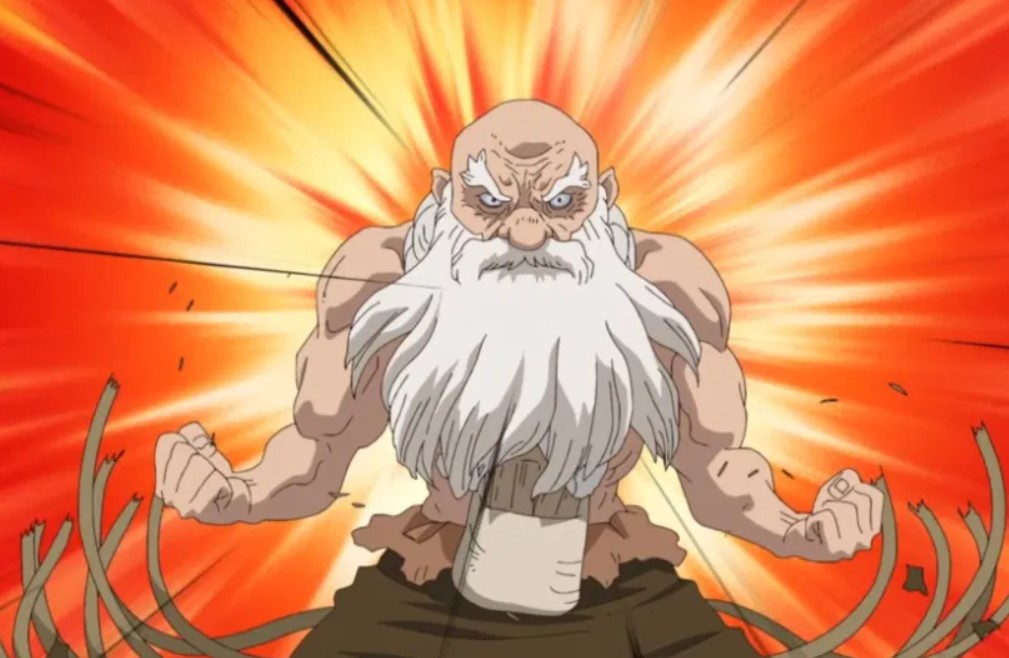 She is worried that if she tries to communicate with them, the gang might find their location. Francois decided that she cannot risk their safety like that, and she decided that they will return on foot. Suika notice that enemies have not come prepared for the amazon creature. She saw a lady enemy being bitten by something. The lady started rolling on the ground, but Francois realizes that they have medicine given to them by Senku.

She realizes that they are the center of the operation, and they must not get caught. Suikanotice that the enemy lady might die, and she rolls and treats her wounds. While Senku ties Xeno, Xeno told Senku how far he could Stanley go when he wants to rescue his team. Senku replies that he is aware of everything, and the enemy lady thanks Suika for helping her. Francois just heard the word freeze and while Suika is finishing to help the enemy lady. Suika is in grave danger and it could ruin the entire plan.

Get Dr. Stone’s latest chapters officially on VIZ Media and Shueisha’s Manga plus. Those who missed the last chapter updates and spoilers can get them here: Dr. Stone Chapter 185.