Lilian’s song touches Nikki that she even shed tears thinking that she is talking with the real Lilian. She is glad that they have revived Lilian, who lives forever in her favorite song. Senku told Nikki that he would use science to protect the last song of Lilian. He also comments that to fool everyone from Tsukasa Empire, they will need this record. Senku told Nikki that they have a common goal since she wants to protect Lilian’s song.

They want to take down Tsukasa Empire, and Nikki accepted the deal, saying that she will join Senku’s crew. She took off the jacket that she got from Tsukasa’s Empire. Taiju comments that they have converted an enemy from Tsuka Empire, and a new ally is acquired. Nikki asks Senku if he is aware that Tsukasa is very powerful, and he de-petrified a lot of capable individuals. But not all of his crew agrees with Tsukasa.

Dr. Stone: Stone Wars Season 2 Episode 5 will be released on Thursday, 11 February 2021, at 10:30 PM JST. Dr. Stones can be streamed across different official streaming platforms; you can stream it on AnimeLab, Crunchyroll, and Funimation. Let’s see how Chrome will survive below.

Nikki reveals that people around Tsukasa Empire are just scared of him since he is called Strongest High School Primate. They are forced to follow Tsukasa’s orders, and they must not underestimate the left and right-hand men of Tsukasa. Nikki said Senku had met one of the men. Senku comments that it is Hyoga and Nikki said the other one would be a huge obstacle for Senku’s plan. She reveals that the guy is Ukyo and Taiju said it is that archer.

Meanwhile, Ukyo is still hunting Chrome and Magma, who is surprised at Ukyo’s tactics. Chrome is wondering why Ukyo is missing them since he is a sharpshooter. He decided to think over everything using science. Chrome realizes that Ukyo wants to capture them alive and get more intel from them. Chrome thinks he knows how to escape without dying. But it’s too late for him to execute his plan.

The smoke gets cleared, and Magma finds that Chrome is missing. Magma looks at the mountain top and finds that Crome is captured. Ukyo comments that there is no need to tie Chrome crome since he has already lost. He unties Chrome and heads with Crome to the cave. Chrome is wondering why Ukyo has untied him and thinks that he want to fool him. When they reach the cave, Chrome saw an army of powerful muscle guys.

Tsukasa comes in front of Chrome, who realizes that this is the guy that rules the Empire. Chrome comments that there is no need for an introduction. He has been waiting to meet with Tsukasa, and he is a good friend of Senku. Tsukasa comments that Crome has a good vibe while Magma heads to the village. Kinro saw someone approaching and reports to the crew. When they get outside, they find that it is Magma.

Magama reveals everything that has happened, and Kohaku sets off to Tsukasa Empire. Senku did not comment anything; he just heads nearby to do something. Kokyo tried to call Kohaku to come back, but she continues with her journey. Ginro remarks that no one can keep up with the speed of Kohaku. Senku shouts that come back lioness and Kohaku stopped. Kaseki and others are surprised that Kohaku stopped snd they went near here and grab her. 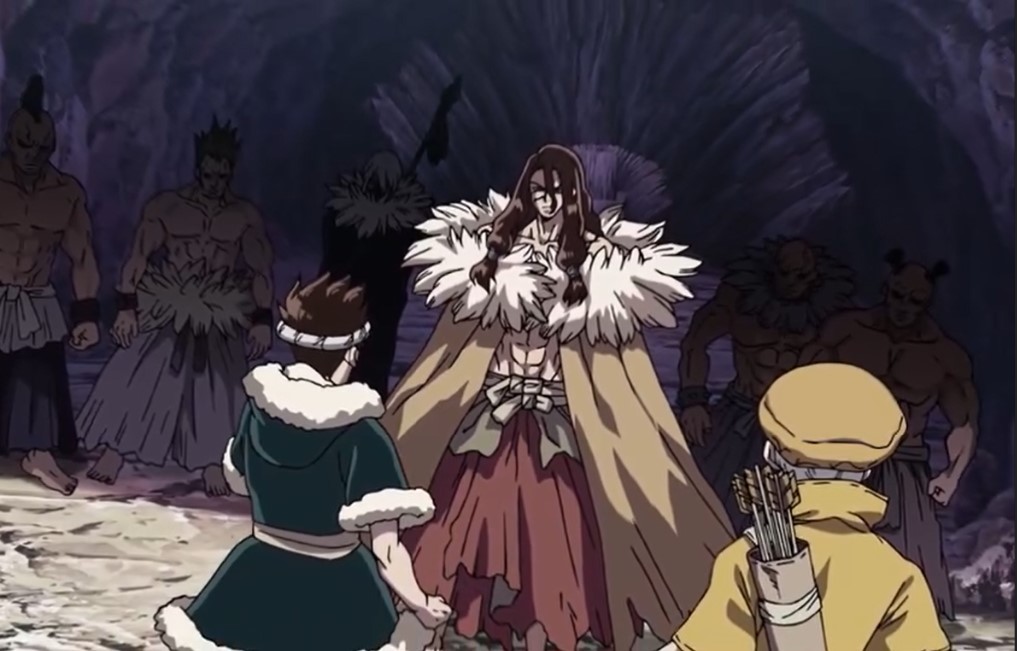 While they are grabbing Kohaku, she asks Senku what they should do. They cannot let their guys die in Tsukasa Empire. Senku comments that there is no need for them to worry again, and they have something for Tsukasa. Senku is glad that they have Homura in custody. He said that they are going to build a camp near Tsukasa Empire. They are also going g to make a Kingdom of Science full assault.

The crew prepares to leave the village, and Ginro is worried that Tsukasa Empire is dangerous. Kohaku comments that winter is coming in 2 weeks and they have to move. If they stay Tsukasa Empire will attack, and they will be defeated. Tsukasa Empire has many muscular guys who can survive in the cold, and they are tough. Senku remarks that the best offense is defense. Senku said they are leaving with all inventions.

Gen asks why and Senku comments that if they leave some, they won’t save Chrome from Tsukasa. He also said that they would also lose to Tsukasa ten billion percent of the time. Senku said they are going to make automobiles to make things easy. The crew started to work on the new science project. While at the Empire, Hyoga holds Ukyo with his spear, trying to throw him over the edge.

Chrome thinks that he will die, and they ask him to tell the truth about Senku’s plan. Hyoga told Chrome that is not too late for him to join them and offer Senku’s heads. Chrome refuses, and they throw him from the mountain top, but Tsukasa signal Ukyo to save Chrome. Ukyo fire an arrow that pins Chrome with the mountain. Tsukasa comments that there is no need for the to torture Chrome since he will never betray Senku.

Tsukasa also comments even a good or bad cop cannot make Chrome spill the bean. Hyoga comments that it means they are just going to guess why Chrome is here. Ukyo was asked to tell where he find Chrome, but Ukyo tells the lies. He said that Crome has come for nitric acid instead of telling them he was around the grave. Chrome is wondering why Ukyo has lied to Hyoga and Tsukasa. Chrome thinks that Ukyo is starting his revolution in Tsukasa Empire.