All of Moro’s minions are defeated and captured by earth’s warriors now only Moro himself remained.

Goku began his fight with him in his ultra instinct form but in sign form and now he can activate it with his own will.

Seeing him using ultra instinct even Moro got surprised that how can a moral use such a divine technique.

Dragon ball super manga getting crazy chapter after chapter. Every chapter is so hyped that fans just cannot able to wait for the next chapter release. And chapter 58 doesn’t break this trend.

This is proof of Akira Sensai and Toyotaro’s hard work as they are giving their best to make the manga as awesome and enjoyable as they can.

According to Piccolo, the whole universe fate depends on this battle.

Goku began his attacks with his air blow like we in power tournament when Jiren used his punches to create a force with air.

Moro tried to block and counter-attacked on Goku with ki blasts but we all know how ultra instinct works.

Goku’s body avoided those attacks on his own. Seeing that his attack not even touching Goku, Moro’s used his power to immobilize Goku.

It’s like Moro has many hidden tricks that he will show us slowly.

Meanwhile, Vegeta is still under training but he can sense Moro and Goku battle. 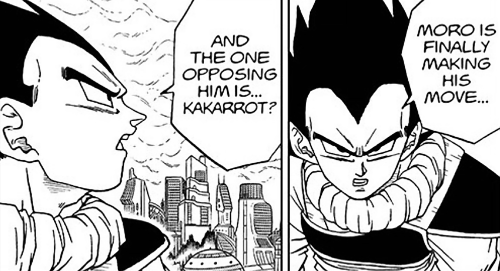 Gohan told Goku, they gathered all dragon balls at Dende’s place if anything goes wrong they to revert back the earth to normal.

So now Goku can fight with all might without any worrying. It’s like Goku’s speed is winning against Moro but then Moro tried his energy absorption trick but Goku dodged it.

Whis and Meerus also watching this fight. They are talking about can Goku achieve sliver haired ultra instinct form. On that Merus clarify that he doesn’t about it.

Then we saw Moro goes to a power-up revealed to Goku during his way to Earth he devoured many planets to fill his energy and he still not fighting on his full power.

He even finds out Goku’s weakness that he can’t maintain this form for so long. After powering up Moro captured Goku and absorbed his energy. Goku went back to normal.

But Moro is not the only one who’s hiding his power as we all know how Goku is. It’s like he faked his ability to Meerus about Ultra instinct final form.

We are going to see Goku in the final form of ultra instinct but it is still unknown will it be enough to defeat Moro.

It is also still unknown when will Vegeta’s training over but it confirmed that he has learned and it is possible that he will be more powerful than Goku.

He also learned ki sensing and instant transmission on a different level than Goku, I mean think about this he can sense Earth’s battle from planet Yardart.

Even Goku doesn’t do that as proof to this fact, he needed Krilin power up to pinpoint earth’s location when he was on his way to earth in a spaceship.

Soon, Vegeta will also be on earth, and when he arrived everyone will be shocked seeing his power even Goku.

But for we have to wait for the release of Dragon ball super chapter 60 release date.

Where you can read Chapter 60

You can read Dragon ball super chapter 60 officially on viz media’s site. You can also read it on many unofficial sites like mangareader, foxmanga, and many more or just google it but I suggest you read it on the official site to support them.

That’s all guys, hope you like the article, if you loved this one then share it with your manga or anime lover friends.

And don’t forget to comment below what you think and your predictions about Dragon ball super chapter 60. For more updates, alerts, and news regarding the anime/manga industry, you can follow us on social media.

Solo Leveling Chapter 123 Release Date, Spoilers, and Where to Read