Our past holds a great impact on what our newer self and our future will look like. It moulds our future to such an extent that it becomes difficult for us to change it’s existence in our life. But what if the past that you managed to bury down has eventually come back to you?

Jeetu Joseph is back again with the sequel of his superhit suspense thriller titled Drishyam. The team is back again as they reprise their roles and help the story move forward. Drishyam 2: the resumption’s story picks up pace in the second film right from the place it was left at initially. The official trailer of the film was dropped on YouTube a couple of days ago. So if you’re excited for the sequel as much as we are, keep reading for the brief insights we’ve got for you.

The lead cast of the film

As the trailer kick starts, we see the Georgekutty and his family who are back to their normal life. Six years have passed after the family went through the tragic set of events. They have managed to evolve and move on from what initially was trying to hold them back. Anu has grown up and is studying in a boarding school, George has set up a cinema theatre and Anju is now eligible to get married. We see Rani informing the family about Anu’s return from the hostel. Slowly as the trailer proceeds, we get to know how Georgekutty has emerged as a producer along with his ownership of a theatre. But it all came at a cost. Georgekutty has taken up a huge loan that worries Rani. Instead of using the money in cinema, she wants to invest it in Anju’s marriage. Everything seems normal, until a police officer begins investigating about him.

People keep gossiping about Anju and Varun and innumerable rumours begin spreading as to how both of them were in love, which infact is a total lie. Thomas tries to put an end to all these assumptions but people feel he is the only one who thinks Georgekutty is innocent. Soon the family’s world is thrown away to six years back in time. The same policemen, the same interrogation, the same eyes of suspicion. All over again. It scares Anju and Rani to core when they see the policemen approaching them. But Georgekutty knows, there’s no way of escaping. They’ve got to face the situations no matter what, but with strength and confidence. He knows that once the new CI comes in town, they’ll investigate the case once again and this investigation will continue until the day they die. The new team feels that the people whom Georgekutty hoodwinked, might be a way to frame him for Varun’s death.

IT’S OFFICIAL… #DRISHYAM2 TO PREMIERE ON DIGITAL PLATFORM… #Drishyam2 – the second installment in #Drishyam franchise – will premiere on #Amazon… #Drishyam2Trailer will drop on 8 Feb 2021… Stars #Mohanlal in the central role. pic.twitter.com/fsOEDMvpRH

They soon begin opening up every bit of the case from the very beginning. Every detail is soon rechecked and new possibilities and assumptions are carved out of it. The family that has suffered so much cannot fail now. There’s no way they can shatter into pieces, because one mistake can put an end to their happiness and togetherness. On one hand where Rani is scared and senses something bad is approaching towards her family, Georgekutty has taken the responsibility of protecting his family, like always. He feels that if he has managed to be a shield for them till now, he’ll even emerge as a wall if situations question his family’s well being. So will he be able to guard his family yet again? 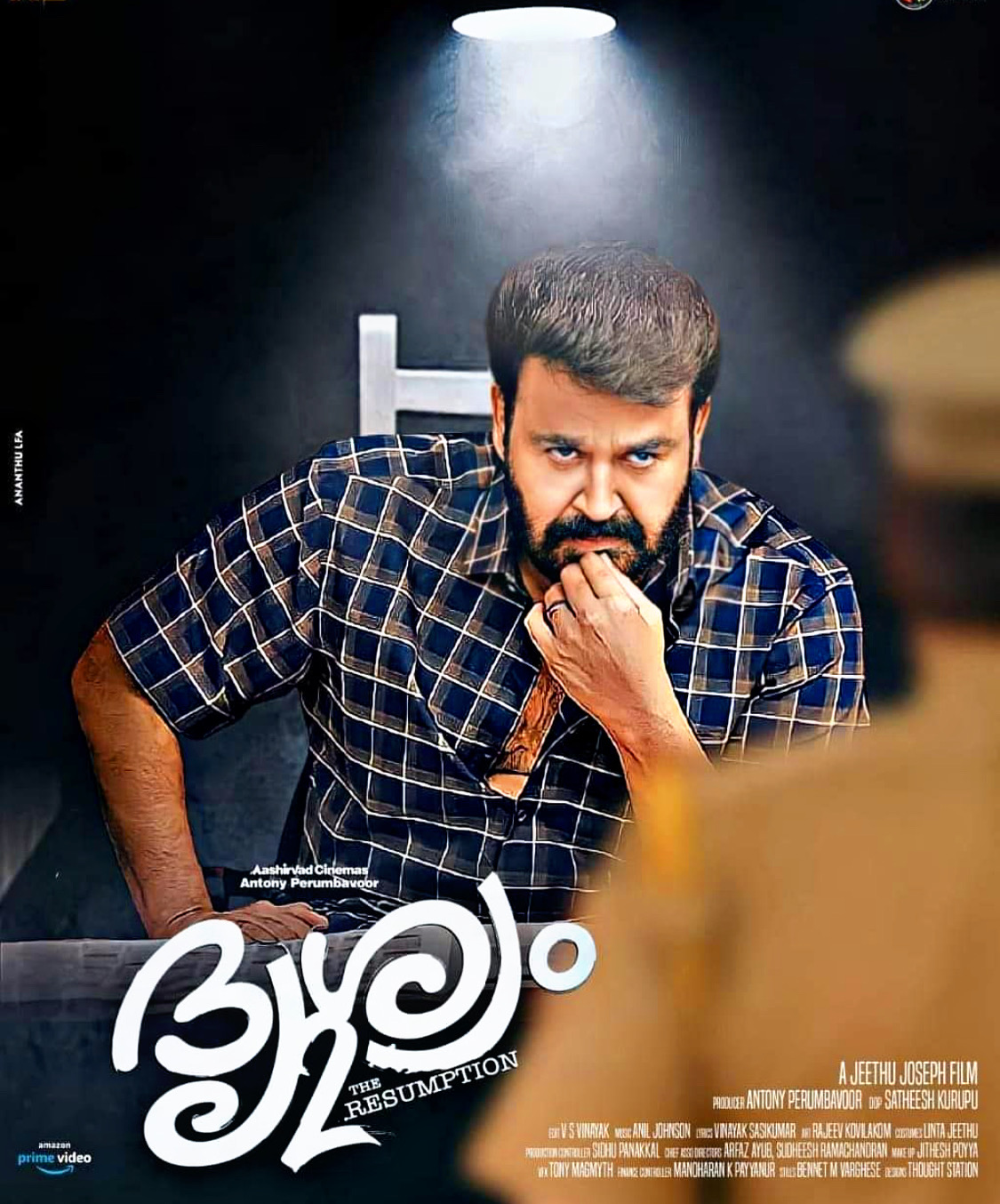 Promotional poster of the film

Starring Mohanlal as Georgekutty, Meena as Rani, Ansiba Hassan as Anju George, Esther Anil as Anumol George in lead roles, alongside Asha Sarath as Geetha Prabhakar, Siddique as Prabhakar, Murali Gopy as Thomas Joseph, K. B. Ganesh Kumar as CI Philip Mathew, Aneesh G. Menon as Rajesh, Kozhikode Narayanan Nair as Sulaiman, Antony Perumbavoor as SI Antony and various others in prominent roles. The film is scheduled to begin streaming on 19 February 2021 and will be available for the the viewers on the online digital platform Amazon Prime Video.