The time has finally come, that moment Malduk and Demon Maria have been waiting for. The nocturnal sun has overlapped the moon; it is time for Dark Lord Angmund to be resurrected in this world. Malduk opened the rift between dimensions, and King Kyle appeared from within. Malduck is surprised why King Kyle has appeared instead of Angmund. Maria was so excited since she likes Kyle over the Daek Lord Angmund.

But Kyle got wrapped in Dark Lord armor which excites Marduk and surprises Maria. Malduk comments that” Now I see” and he bows in front of the man; he claims that it is Angmund. Maria can’t believe that Kyle got swallowed by the dark powers and Angmund got resurrected. Malduk told Maria to shut up and show some respect in from of the Dark Lord Angmund. He praises the man; he claims that it is Angmund since he can only see Angmund’s armor instead of his face.

King’s Raid: Successors of the Will Episodes 22 will be released on Saturday, 27 February 2021, at 1:23 AM JST. Check King’s Raid officially on AnimeLab and Funimation.

Previously on King’s Raid: Successors of the Will Episode 21

Malduk comments that he has been waiting for his lord’s arrival. The destroyer of the world, and he is ready to start destroying the world and slaughtering humans. At the same time, master Pavel told Kyle and others to follow him since they’re going to unseal the Holy Sword Aea. On their way, Pavel comments that they are almost at Mount Ogria. Frey comments that she never thought the cave had such a shortcut.

Cleo said it means they will get to the World Tree in no time. And finally, get to unlock the final seal. Meanwhile, Riheet is thinking about something. Demia noticed it and told Princess Scarlet about it since she thinks it is dangerous to walk with Riheet. Ever since he has lost his friends, he has been out of his mind. Scarlet is wondering why Riheet wants Illy’s sword so badly. She realizes that he told her that he hates Orveila more than demons.

Scarlet told Demia that they have to go to the Tower of Sage and meet with Dominix. Dominix was Kyle’s companion, and he knows how to defeat Dark Lord Angumund. Demia thinks that they must not go with Riheet since she suspects that he is up to something. Scarlet comments that they will let him go, but Dominix will give them information about Angumund. Demia reminds Scarlet that she is not must not take the blame for the Black Edge being wiped out.

Scarlet told Riheet to watch what she will do, and she raises her sword up and pins it inside the ground. She created a huge spell that teleports them to the top. Dominix welcomes them. He reveals that the dimensional rift has been opened, and the Dark Lord has arrived. Scarlet asks him if he is sure, and Dominix comments that he can feel the presence power of Dark Lord. Dominix said that he knows that they have come to inquire about the Dark Lord. 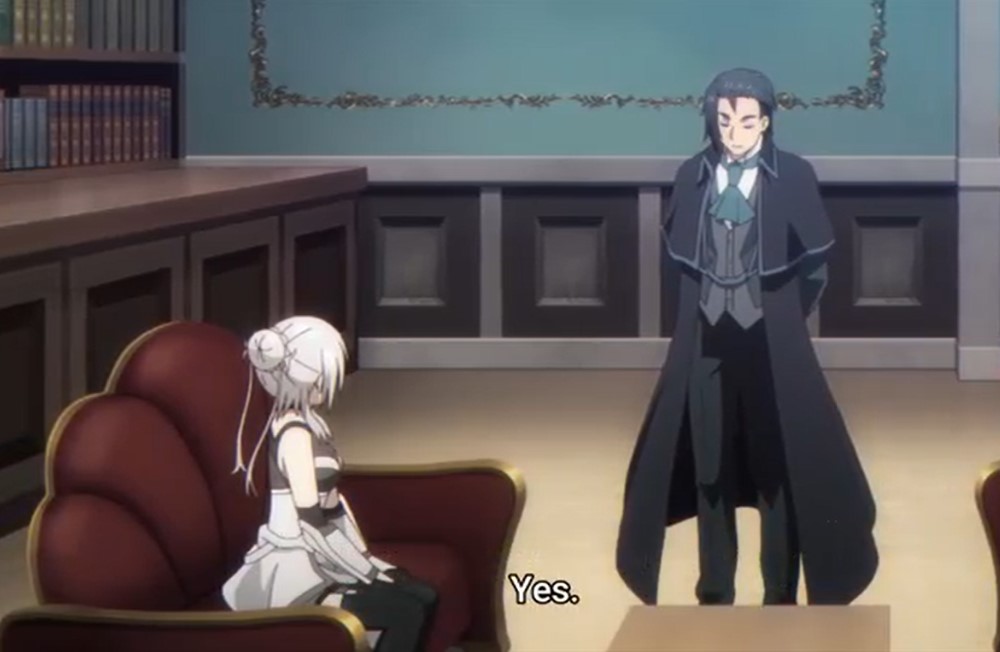 But Riheet has come to asks about something else. Dominix asks Riheet what he wants to know. Riheet said he heard that Illy’s lab is here and ask if it is true; Dominix aks him why he is asking. Riheet didn’t want to explain, and he shows Dominix a necklace that belongs to Illya. Dominix decided to tell Riheet the truth about Illya, and he showed him Illya’s lab. Dominix tells Rihhet to take what he wants from the lab, and he heads back to Scarlet.

He told Scarlet that the only way to defeat the Dark Lord is by using the Holy Sword Aea. It holds the power of Lua, the Goddess of Light. Scarlet said the Holy Sword doesn’t exist anymore. Dominix said it exists, and they hid it in a secret location, the World Tree. Scarlet asks why she was not told about it, and he said they were hiding it from the demons. He told him that the heir to Holy Sword is Kasel, who will retrieve the Holy Sword.

Meanwhile, Riheet finds the truth about Illya and that Illya’s sword was a lie. He can believe that Illya was the one who betrayed the kingdom. Scarlet joined Riheet and told him about the heir of the Holy Sword Kasel. Riheet gets hope that there is still a chance of defeating the Dark Lord. He decided to join Scarlet to defeat the Dark Lord and ask where the Holy Sword is.

King’s Raid: Successors of the Will Episode 22 Preview

Read King’s Raid: Successors of the Will Episode 21. Don’t miss the next episode, only a few episodes are left to reach the episode finale.

Synchronic: A Review – Find Out What Rotten Tomatoes Has To Say About The Movie!