One Piece Chapter 971 Release Date: One piece manga just released it’s latest chapter, in which we finally get the most awaited answer “how and by who, kaiso got injured during in fight and got X mark on his belly”.

It was Oden, who is evenly matched to Kaido and even can defeat him if Orochi and Kaido did not play dirty.

One Piece chapter 970 also revealed many amazing events that happen in the manga. So let’s take a short review of this chapter. If you already read this chapter then skip the review and go to one piece manga chapter 970 release date.

Warning, there are major spoilers ahead in this article for chapter 970, if you have not read that chapter then I suggest you to stop reading here if you don’t wanna get spoiled!

You can officially read one piece manga chapter 970 here

This chapter name is “Oden vs Kaido”.

Oden and his 9 followers headed for Orochi’s mention to take down both of them. 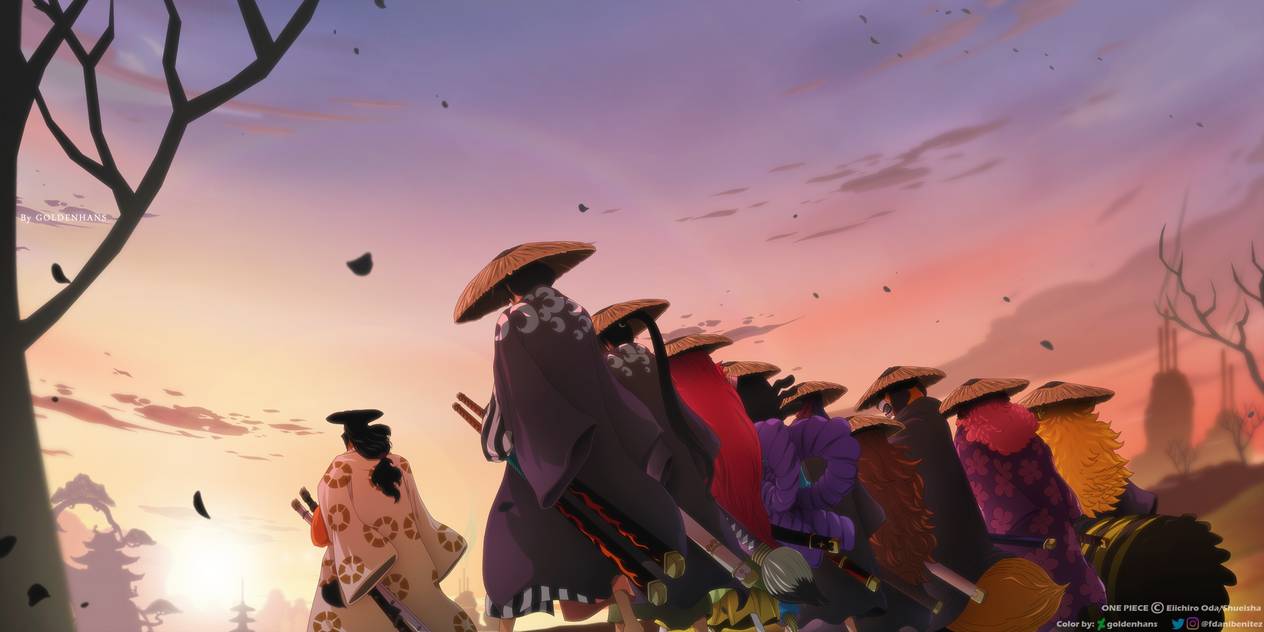 He put Toki and his children under Yaisuke safety.

9 scabbard fought Kaido’s beast army and they are easily defeating them but having a tough time in front of King, Queen and Jack. Orochi is scared of seeing Oden once again.

Kaido and Oden seem like evenly matched both are severely injured and blood dropping from the body. But it’s like he is defeating Kaido as he blows down a cut on Kaido’s dragon form.

Then one of Kaido’s men captured Momosuke and blackmailed Oden.

He tried to save Momo and Kaido took advantage of this situation. He hit Oden with his spiky arm weapon (divine thunder) same attack that he used on Luffy. Thus, Kaido able to defeat Oden.

But that was not Momosuke, it was the old hag from Orochi. She used her devil fruit powers to look like Momosuke as we already know she is the previous user of Clone Clone devil fruit.

Then Kaido says, “if this battle happens 5 years ago, you can easily win”.

Orochi and Kaido knew that if Oden fought them 5 years ago, he easily defeats them. That’s why they Orochi tricked him some kind of contract.

That reveals why Oden dance in Wano streets like a madman. And it is related to Momo and his family.

This battle was so fierce that fire in the forest did not blow off until five days when raining began.

They captured all of Oden’s followers and put them in prison. And their execution held in 3 days.

And it’s like Oden going to boil alive as execution.

The chapter ends here! But in the ending, we can see a female Kunochii similar to Shinobu, I am not sure if she is Shibou or not. But guess what, next chapter will tell us this.

Predictions for One Piece Chapter 971,

Oden and his followers are captured and sentenced boiled alive for death.

But I am pretty sure that before their execution they will be freed, but how this going to happen. I think that female Kunochii will help them to escape on the execution day or before it. This is just a prediction!

Let’s wait for the release of one piece chapter 971 and see what this chapter will unveil.

Fans are really excited and able to hold themself for this chapter but the bad news is that One piece was on break next week and will release after 2 weeks.

Where to read One Piece Chapter 971

You can read One Piece chapter 971 officially on viz media’s site. After its release, it is also available on Mangaplus App and Shonen Hump app and  You can also read it on many unofficial sites like mangareader, foxmanga and many more or just google it but I suggest you read it on the official site to support them.

Also read– Boruto Chapter 43 Release Date, Prediction and where you can read it

That’s all guys, hope you like the article, if you loved this one then share it with your manga or anime lover friends. And don’t forget to comment below what you think or your predictions about One Piece chapter 971.

One Piece Chapter 973 Release Date, Predictions & where you can read it

Dragon Ball Super Chapter 58 Release Date, Scans and Where You Can Read it

Superheros Home is your Anime/Manga news, entertainment website. We provide you with the latest breaking news and videos straight from the entertainment industry. Superheros-home.com participates in the Amazon Associates Associates Program, an affiliate advertising program designed to provide a means for sites to earn commissions by linking to Amazon. This means that whenever you buy a product on Amazon from a link on here, we get a small percentage of its price.
Contact us: [email protected]
© Copyright 2019, All Rights Reserved Superheros-home.com  |  Site designed by SemClouds.com
MORE STORIES

Dragon Ball Super Chapter 57 Release Date, Predictions and Where You...