Meliodas and others are trying to get out of Purgatory. On the way, Meliodas reveals his past about his young brother Zeldris to Wild and Ban. Zeldris became an executioner to save his vampire bride Gelda. But his plan fails since he heard that the Sins executed Gelda. Zeldris vows to avenge Gelda from the Sins, who took the love of his life away from him. At the dark territory, Zeldris is one-on-one with Escarnor.

Escanor attacks with his final blow that turned him into a skinny Escanor before he finishes off Zeldris. Cusak and Chandler decided to join the fight, and Marlin thinks that Escarnor has done it. Chandler rises and unleashed Darkness around the dark territory. Lidociel wanted to finish Zeldris, and Cusak blocks him back while attacking with a laser. He told Zedris that they could take care of the Sins.

The Seven Deadly Sins Season 5 Episode 5 will be released on Wednesday, 10 February 2021, at 5:55 JST. Watch this Anime officially on Netflix, and for more updates, you can also visit its official website. Let’s move to the battle between the Demon Race and the Sins below.

Zeldris told Cusack not to let the Sins interfere with Meliodas, and they must show the true power of the Demon Race. Lidociel asks the two if they have finished saying goodbye, and Hendrickson calls him. He asks Lidociel to heal Gilthunder’s wound. Lidociel comments that he is busy, and Chander jumps in front of them. Chandler asks Cusak if he wants him to clean up the garbage in front of him while taking care of a girl.

Ludociel comments that Cuscask and Chandler are nothing to him since he can face Zeldris. Ludociels is hosting Magret’s body, so Chandler and Cusack call him a girl. Cusak and Ludociel exchange slashes, and Cusack comments that Zeldris has taught him to master sword. Ludociel landed a powerful blow on Cusak stomach and told him not to let his high hopes up. Cusack headbutts Ludociel, and he stumbles back, noticing that Cusak is not hurt.

Cusack asks Ludociel if it that the limit for someone who borrows a body. At the same time, Chandler asks the daughter of Belialuin to start their battle. Merlin unleashes and Etaerminate Ray. Chandler attacks back with the same attack and cancels Merlin’s attack. Escanor is wondering if Chandler uses the same magic as Mellin. She told Escarnor to run while Chandler’s attention is diverted.

Merlin sends Chandler flying using Enchant Infinity. Hendrickson asks Escanor if Merlin has landed a direct hit. Escanor comments that he expects it from Merlin’s Infinity magic, not even the most powerful demon can bear it. Skinny Escanor asks Hendrickson if they can withdraw while they can. When he is getting up, Ludociel is sent flying in Escanor direction. They both bang with the ground, and Merlin comments that Cusak magic sems to be sealed.

Merlin comments that the two are the most powerful demons except for the Demon King. They are strong, fast, tough, and they don’t have a weakness. Merlin comments that if they don’t have a weakness, they have to create it. Ludociel remarks that they are not the opponent to underestimate like this. Merlin attacks two demons without making a move. Chandler remarks that they can’t be attacked with a simple attack. 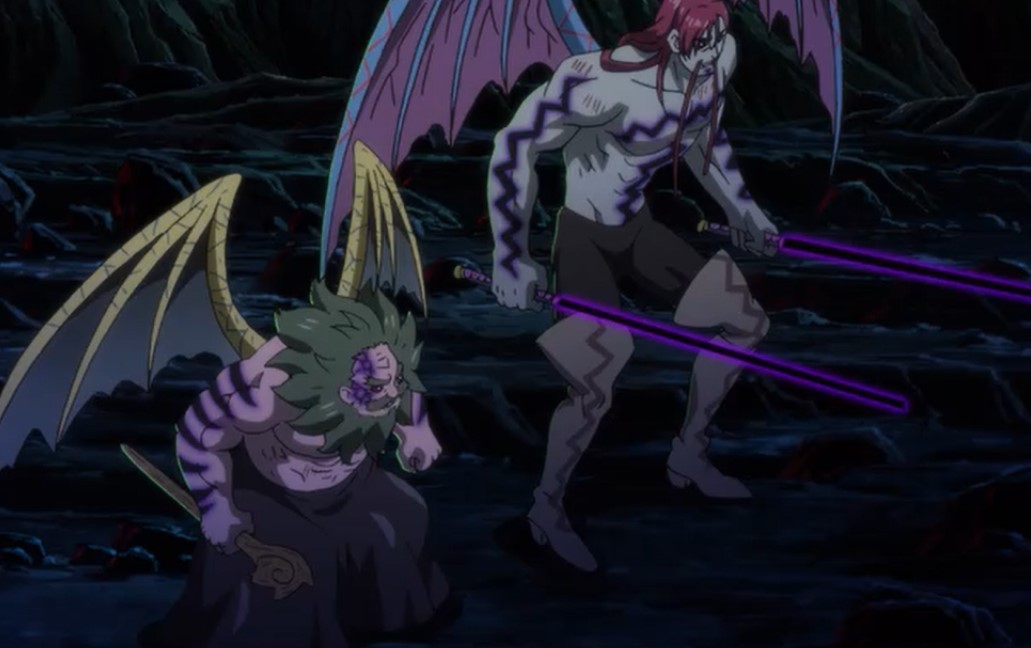 Merlin reminds them it is the Doble Impact, the magic that let them down when the fight started. Using fast waves, Merlin can cast magic composed of the four elements. That is how she has able to create a weakness for the two demons. Merlin reveals that Chandler’s weakness is now lighting, and Cusack is wind. Besides, the second wave makes their resistance to them decrease even more. All the time, when she attacks adding Infinity, it makes that resistance decrease more.

Merlin told them that they wouldn’t escape her magical elements, and they will suffer until they die. The mysterious attacks will keep on attacking them without any move coming from her. Ludociel comments that it is an insane spell and Merlin said she doesn’t even know where it comes from. Merlin remarks that she has multiplied transparency, unbeatable, search, and Infinity on those two elements. Escanor asks her when did she make that move.

Merlin comments that she did the movie when she was using teleportation to flee Zeldri’s Ominous Nebula. Chandler remarks that he cannot believe that humans are humiliating the power of the Demon Race. Cusack gets up and comments that they will never be humiliated again. He used Resonant to get inside Merlin’s mind and told her that she would repent for going against high-level Demons. Merlin comments that it is he who decides.

She sent Cusack flying, who is wondering why. Merlin comments that she knows that he will make the Resonant move. She told him that it is time for him to pay what he did to Arthur. Zeldris comments the Sins must not think they have won; he can use the Demon King magic above all magic. Ludociel attacks and sends Zedris to the ground; all the Demon Races are on the ground. Ludociel comments that they have won the long Holy War.