Solo Leveling Chapter 122 Release Date: In the latest released manga (known as Manwha in Korea), Shadow army and Arch Lich’s undead army in front of each other and it’s like Arch Lich isn’t liking this at all and decided to complain this matter to Monarch itself.

But what shadow army don’t like most from this discussion that Arch Lich talk so much and clashed with Arch lich to make him shut up forever.

In this week’s post, you will know official Solo leveling chapter 122 release date, predictions, and spoilers.

And in the last section, we also mentioned where you can officially read upcoming solo leveling chapter 122.

Spoilers warning: In the next section we are going to share many spoilers related to chapter 121 and if you haven’t read that chapter yet and don’t wanna get spoiled from it then we suggest you read that one first to skip the recap part.

This chapter titled- The Fall of The Arch Lich Army

The clash between Beru and Arch lich began and without wasting any time Beru targeted his chest core and scratched away from the chest, then crushed with his hands.

Just in a short span of time, he defeated an Arch Lich that defeated a powerful monster that annihilated China’s top guild and created dungeon break.

Knight guild hunters were also amazed this scene with their eyes that Jin Woo’s summon creatures are so strong that they can clear such top rank dangerous dungeon even without Jin Woo.

In the end, they decided to form an alliance with Jin Woo’s guild so they can always get benefits from his power as according to Agency’s rule there is need at least 20 members to enter in dungeons as gild.

But they didn’t know that in future this rule is going to vanish only for the solo leveling Hunter Jin Woo.

Then the scene shifts to school bizarre bloodshed dungeon break accident, where many students and some Jin-ah friends lost her friends but hopefully Jin Woo reached in time and saved his sister and 10 other students.

Hunter’s agency president picked Jin-woo in his car and showed the detailed data on increased dungeon gates appearances in Seoul and other nations.

And in their discussion, Go-Gun-hoi (president) also mentions how big powerful countries like the USA hijacking their S ranking hunters and now there are only a few counted S rank hunters in Korea.

So he is willing to offer anything to stop Jin Woo remain in South Korea.

Jin-Woo got the idea what president Go-Gun-hoi trying to say and offered his one and only condition. If the president can fulfil this condition then will do as he says.

Then the hospital where Jin-woo’s sister hospitalize arrived, and after hearing Jin-woo’s one and only condition, the president got shocked as he never heard such thing or even think in his entire hunter career.

Jin-woo’s condition was uplifting the guild members count for him to enter lonely in High-rank dungeon gates in future.

Go-Gun-hoi left the place with smile and assurance that his condition will be granted soon.

On the other hand, Jin-ho searching the last founding member for their guild so he contacted his actress cousin sister who also an A rank hunter to fill that spot.

After hearing whose this guild belongs she agrees and finally meet the Jin-Woo for the first time.

And then an unexpected thing happened Jin-ho cousin sister who is now the official third founding member of their guild shot a selfie and posted on a social media. 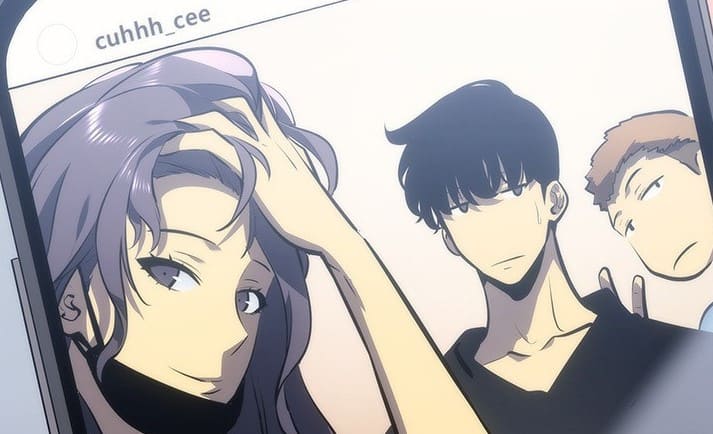 Soon this post and news went viral and reached to a certain person.

On the other President held a meeting of the high executive of Hunter authority and announced the request of Jin-woo.

Although all the are quite but one person opposing this requestion lift up the minimum count rule for his favourite hunter.

Then-president offered him a situation that spinned his mind why they need Jin Woo.

So tell me said by Go-Gun-hoi what you will choose in the condition of dungeon break, a team of 20 or one-man team Sung Jin-woo.

Which one do you choose?

Everyone including that man too understands that and instantly approve the Jin-woo condition.

In the last page, it is shown that The viral post of news even reached to Cha-Hae and it’s like she didn’t want other women near Jin-woo.

And here’s this amazing chapter ended.

Solo Leveling manga chapter 122 will release on Thursday, 4 October 2020. You can read solo leveling chapter 51 after the countdown hits zero on the official media website.

In the upcoming chapter 122, A new high-rank gate appears and as the Jin-woo’s condition accepted by hunter authority. He can now solely enter the high-rank gates without team whenever he wants.

Jin-Woo and Yu Jin-Ho standing to in front of that A rank gate and its the first when Jin-ho saw an A rank gate.

Soon they entered the gate and rest is going to happen in Chapter 122 and wait for the release date.

Where you can read Solo Leveling Chapter 122

You can this solo leveling latest chapter officially Kakao Page Magazine and the best part by reading this official source you are supporting creators.

Plus, if you want to start reading solo levelling from start. Tappytoon is the best official resource to read Solo levelling and other more amazing manga. They offer the first 15 episodes are free to read!

As per Fandom Solo Leveling (나 혼자만 레벨업, Na Honjaman Lebel eob) known as I Level Up Alone in English is a novel written by Chu-Gong ( 추공) on February 14, 2014. It was then serialized as a novel in Papyrus that ended with 14 volumes and 270 chapters. On April 13, 2018, a webtoon serialization was released on Korean mobile site KAKAO PAGE drawn by artists Gi So-Ryeong. Currently, the story is on Solo Leveling Chapter 122.

Boruto Chapter 51 Release Date & Where you can read it