The Expanse Season 5 Episode 7, titled “Oyedeng,” is one that focused more on the drama between Naomi, Marco, and Filip. The events pick up after the last episode as Naomi is about to be spaced but is instead locked in. Now, stuck in a room and her time about to end on the ship, Naomi is left to think back on her past. Even though she has been able to form some connection with Filip, she knows it is nowhere enough to the hold Marco has on him. Marco’s manipulations have made Filip always wanting to please him. And thus, there is only so much Naomi could do. This episode by The Expanse is titled “Oyedeng,” which is the belter word for Goodbye. And now having to leave her son twice, this needs a significant buildup for its impact, which the episode tries to deliver.

Marco and his manipulations

As the episode begins, we start to see Marco’s influence on his son. As Filip in his room is reading about the events of the slow zone and what happened in the behemoth, Marco interrupts him. But as Filip tells him, he was reading about Pallas, Marco takes advantage of it. He tries to rekindle their humble past and remind them what they have been through. He is being highly manipulative, making Filip wanting to make him proud. Even so, he knows this, and he only acknowledges his desire than say he is proud of him. He further extends his cause by trying to imply that Filip may have formed some sentimental value with Chetzemoka. Marco acts as if he cares for Filip by asking his permission to make use of the junker flight. Filip, who wanted to please his dad, says that the ship meant nothing to him.

After this, Marco goes to Naomi with oozing narcissistic charisma. Here again, he tries to remind her of the past. But Naomi knowing how Marco works does not give in to his tricks. The two are seen going back and forth as to how Marco forced Naomi out of Filip’s life. Marco comes up with an excuse that he did it only to bring them back together. Naomi can see that Marco wasn’t sincere, and both keep pushing each other’s buttons. Naomi feels like the pain of losing Filip was not as horrible as staying with Marco. Judging from this analogy, we can guess how much of a manipulator Marco was back in the day.

As Naomi is now free to roam the ship, she goes to Filip’s room, where she learns some things about him. She realizes how much of his life she has missed. And both have a mother and son conversation. They discuss Naomi’s work back in time to save belter lives. She tries to change Filip’s ways, but he remains reluctant to do so. He feels that he is a fighter, so he must focus on gaining his father’s approval. During the conversation, both have a touching exchange where Naomi tells him why she left him in the first place. She saw how manipulative Marco was and decided to leave with Filip. But Marco hid Filip away. Now trying to find her, she spent months but finally had to give up.

She decides to go into the airlock and commit suicide, but then she realizes that taking the step was not worth it. And she finally decides to leave, thus finding her peace far away from Marco.

Back in the Rocinante, Holden and Bull try to locate the Zmeya as they need to get their hands on the protomolecule. They intend on destroying it meanwhile, Monica is preparing for failure. Monica will soon be an important character. As she has reached out to a source with a connection to the Inaros faction and will know as soon as any handoffs are made. Even though Bull is only a recent character, he has known Fred for Johnson for a long time. And already has come to know quite a lot about James from him. During their course, as they make contact with Alex, they find out about Marco’s 9 battleships from Mars. Out of which one of them was the Chetzemoka, which James easily recognizes. The protomolecule being the primary objective, the Rocinante do not change their course. At the same time, James asks Alex to keep track of Naomi. 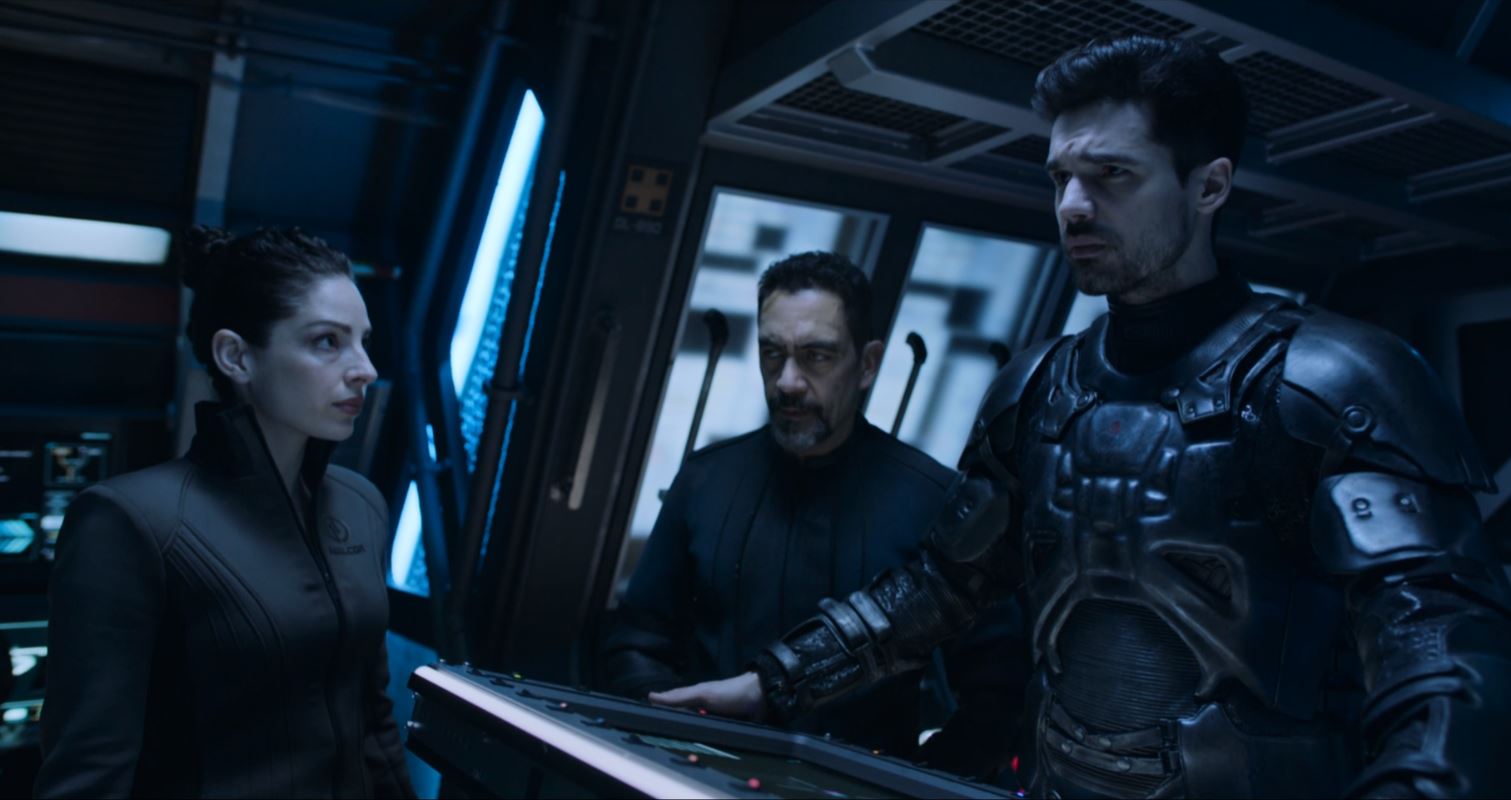 On their course to Zmeya, Monica points out to James that there might be someone higher than Marco on Mars. Buying battleships on Mars was way more difficult than getting hold of arms and ammunition. James analyses the situation as he tells Monica how Naomi was caught by Marco as they have a child together. He further tries to explain the situation when the ship finally has eyes on Zmeya. And we see a kickass battle between the two ships as the Rocinante tries to defend itself. The Zmeya shoots out torpedoes, which are evaded by rolling out while taking out all of them using blasters. The Rocinante takes minimal damage, as they make use of a rail gun to disable the Zmeya. James intends to board the ship, but it seems that the protomolecule has already been carried away as the ship blows up.

As Cyn comes back from the Chetzemoka, he has a heartfelt exchange with Naomi. He reveals how he followed and saw her trying to commit suicide by entering the airlock. He apologizes to her for helping Marco hide Filip and had only done so as he felt that it would bring them back together. She forgives him only to hear that he loves them all and wants to get back together. Later, Cyn pleads to Marco to leave Naomi, but he has no intention of doing so. These exchanges are well planned to provide him with a good farewell at the end. 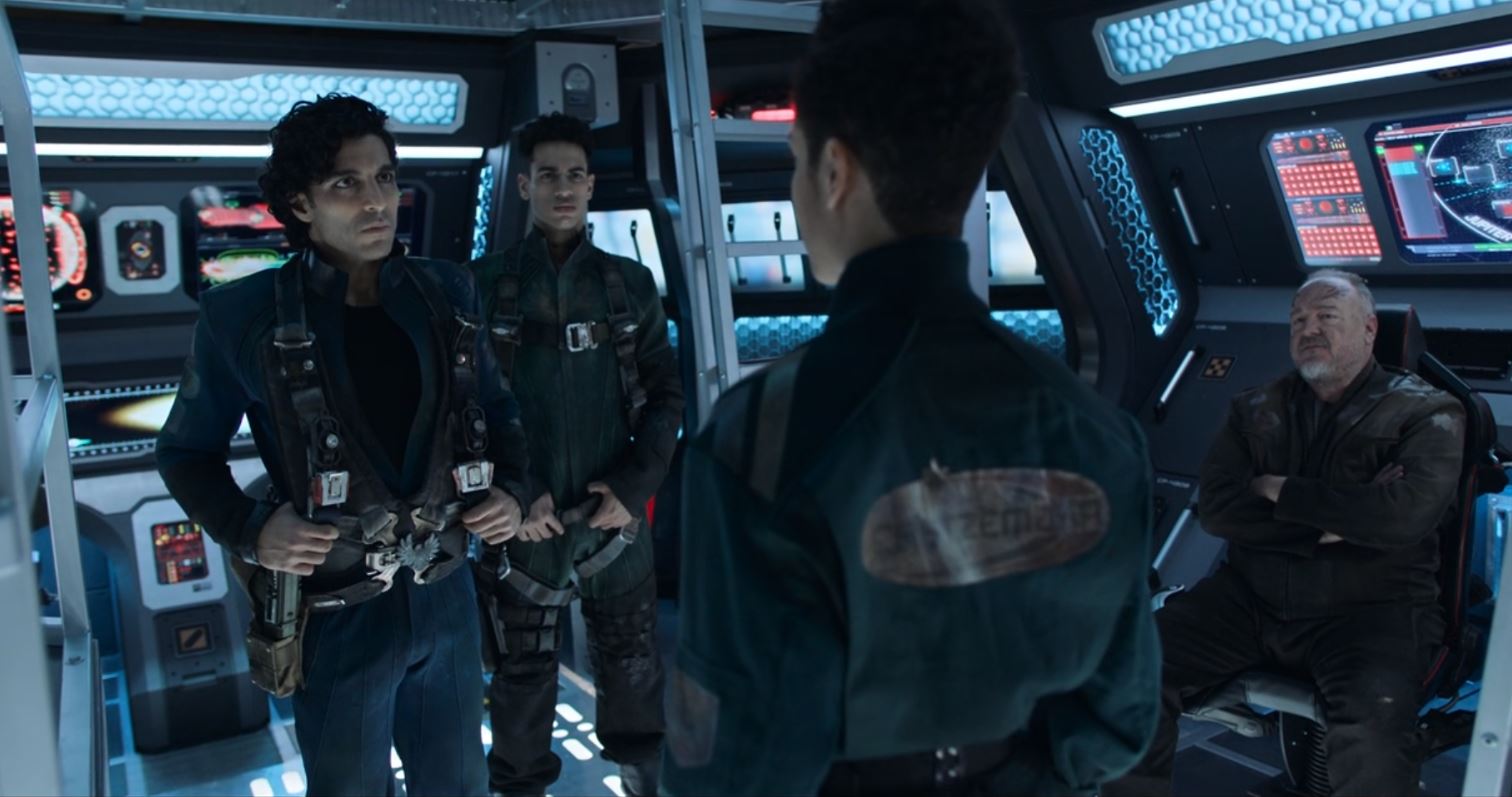 Filip goes to Marco to ask for him to be assigned as captain of one of the ships. Marco flips back as he blames all that had gone wrong on Filip’s weakness. He tells him that he is his heir but will only lead after he is gone. Fueled by a desire to make a name for himself, Filip decides to leave Naomi. But only after using the Chetzemoka to lure her family and kill them. After which, she will be put in the float. Naomi has a final attempt to reach out to her son, but Filip is focused on doing his Father’s bidding. And to be known as the person who took out the Rocinante. With nothing else left to do, Naomi decides to leave again. But she must stage it as a suicide as she cannot have them know that she is alive.

Naomi cannot make use of a suit, so she must travel to Chetzemoka exposed to the vacuum. Filip may think that he caused her death but having only a limited time to decide, she decides to go with the plan. As Cyn looks at the monitor, he sees Naomi at the airlock and tries to stop her. But Naomi must leave just then so Cyn becomes a sacrifice as he gets exposed to the vacuum. As she was to be exposed to vacuum, she breathes heavily in order to remove air from her body. And she launches herself towards the Chetzemoka. She has 15 seconds before she loses consciousness. This is even indicated by the red color around her vision. As she almost reaches the ship, she jabs herself with hyper oxygenated blood. But being exposed to vacuum and the sun, her body is damaged, causing burns and swelling.

Overall this episode of “The Expanse” was as fantastic as it could be. We can see how during the entire episode, Naomi tries to plan out an escape. We see how Naomi sets things up by interacting with her son. She knows that there is nothing much she could do, so she decides to plants some seeds in his head to walk away from his father. The episode has a wonderful script slowly building up to the climax. And the acting from the cast only elevates the story. This episode is heavy in character stuff and provides with many defining moments. It is crafted well and is gripping to watch. And unlike the previous episodes, it has balanced stories which all head in the same direction.

You can watch all episodes by “The Expanse” on Amazon Prime Video.