The United States vs. Billie Holiday is an upcoming American biographical drama movie. The Director of the movie is Lee Daniels, and the film is based on the book Chasing the Scream: The First and Last Days of the War on Drugs by Johann Hari. Andra Day plays the main lead of Billie Holiday, along with Trevante Rhodes, Natasha Lyonne, and Garrett Hedlund. The legendary Billie Holiday is one of the most popular and most remarkable musicians of all time. She spent most of her career being adored by fans across the globe. During a period of time, the federal Department of Narcotics targeted her with an undercover sting operation led by black Federal agent Jimmy Fletcher, with whom she has a vociferous affair. The movie was nominated for Best Original Song named Tigress and Tweeed at the 78th Golden Globe Awards. Andra Bay is also being nominated for Best Actress for Motion Picture Drama.

The announcement of making a biopic on Billie Holiday was in September 2019, with Lee Daniels as the Director. Holiday’s titular role will be played by Andra Day, with Natasha Lyonne, Trevante Rhodes, and Garrett Hedlund. Later that month, Evan Ross, Dana Gourrier, and Erik LaRay Harvey were also added to the cast. The filming of the movie began on October 6, 2019, in Montreal. The film is being produced by Lee Daniels, Jordan Fudge, Tucker Tooley, Joe Roth, Jeff Kirschenbaum, and Pamela Oas Williams. The movie’s production company is Paramount Pictures, Lee daniels Entertainment, New State Ventures, and Roth Films. The distribution partner of the cinema is Hulu, and the running time is 130 minutes.

The movie is scheduled to be released on February 26, 2021. Paramount Pictures acquired the rights to the film in July 2020. The movie was scheduled to release on February 12, 2021, but in November 2020, due to some issues, it was moved two weeks, and now the release date is February 26. In the United States, Hulu acquires the distribution rights.

There is a fearlessness that underscores the current lifestyle of Andra Day, a unique Hollywood glam in a sea of ultramodern celebrity fashion that more often resembles high art. The google search images of her pictures is a collection of buffed beehive updo’s, pinup-girl curls, and bumper bangs; all finished with elegantly dramatic makeup. 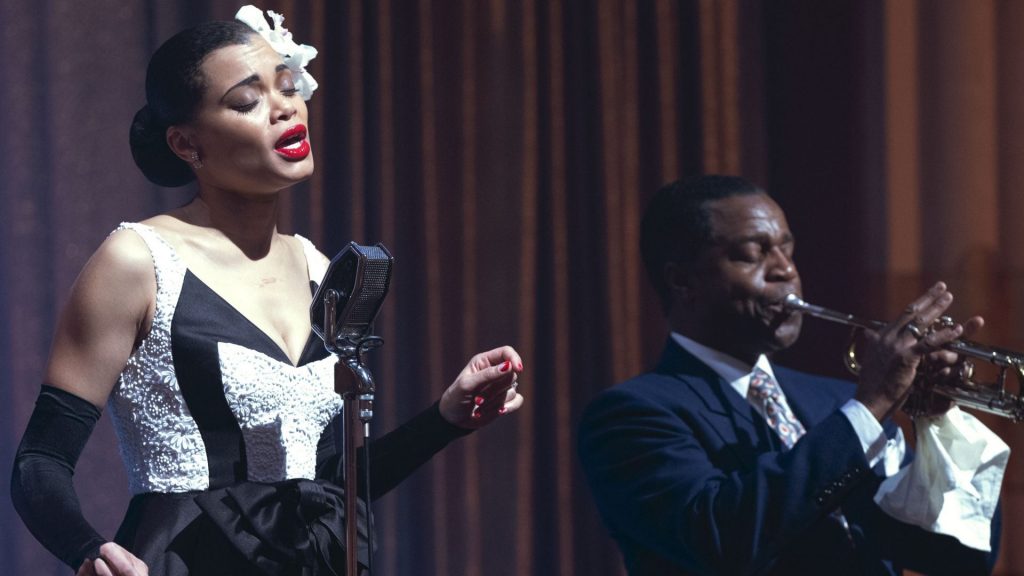 She has long counted Holiday among her style influences and such figures as Lucille Ball, Dorothy Dandridge, Pearl Bailey, Marilyn Monroe, Greta Garbo, and Shirley MacLaine (with extra emphasis on the latter). Her father frequented classic car shows, exposing Day to the women who looked the part. There is no doubt an extension of the Southern California nostalgia-kissed rockabilly subculture to which she attributes her fashion sense. If it were up to her, she would’ve just as readily been born in the ’40s or ’50s (save for the racial terror aspect, she’s quick to point out, which has only shape-shifted today). But it took her into adulthood to start leaning into those inclinations. She was terribly self-conscious that told her she would look stupid or awkward donning the apparel of that era.

In “The United States vs. Billie Holiday,” Day offers up very different kinds of historical corrective. This one seeks to undo the character assassination, which was carried out by Harry J. Anslinger and J. Edgar Hoover, that depicted Billie as a tragic addict who had more problems than redeeming qualities. The chill of her darkness has always been Holiday’s primary story, but Day takes care to tend to the warmth of her light.

“The main focus is on the details of the ’40s and ’50s was given to Andra and all principal females—fingernail shapes, eyebrow shapes, and colors as well as lip colors,” says makeup department head ‘Laini Thompson.’

“I made sure none of the other females duplicated Andra’s lip and nail colors — I wanted everything about Andra’s look to stand out and stand alone. Billie’s iconic nail design had a white V-shaped motif in the middle, which looks unique and futurist of her time. Billie always chooses the perfect design for her lips, making sure they were always perfectly lined. Laini Thompson almost always touched up Andra’s lips at the end of every take.”

Read More: The United States Vs. Billie Holiday – Details About The Upcoming Film