When Netflix announced that their film Extraction is set around the locations of India and Bangladesh, everyone was hyped in these regions. We don’t usually see Hollywood movies surround the Asian premises. This, along with the fact that the movie is starring none other than Chris Hemsworth, along with the Russo brothers as the producers with Joe Russo’s script and stunt’s by Sam Hargrave, who is famous for his contribution to MCU as a stunt man, everyone was super excited to see this movie. Extraction’s hype does reflect in Netflix’s charts too. Extraction was one of the most-watched movies on Netflix, this made Netflix give a green light to its sequel. In the Top 10 facts about Extraction, we will try to cover some pretty interesting facts about the movie. But do note that it won’t be based on any ranking, the facts are distributed randomly.

1. The story was set in South America at first.

The Story of Extraction takes place between some locations in India and major of them in Bangladesh. But when Joe Russo wrote the film’s screenplay, he wrote it keeping in mind South America as the place where the story will take place. But some suggested that the drama may be somewhat similar to Narcos since both of them have Drug Lord as the villain of the story.

When taking suggestions from the Team and many others, Joe Russo agreed to that and decided to change the location to Dhaka, the capital of Bangladesh. It was a very good decision as there are many movies which are set in the locations of South America, but we haven’t seen many Hollywood movies set around places like Dhaka. This also helped the movie a lot when it comes to Cinematography.

Did you know that Captain America directed this movie? Well, no that’s not the truth. The movie was directed by Sam Hargrave. Sam has been Chris Evan’s stunt double in Marvel Cinematic Universe movies for quite some time. So this means that he was also the double for Chris as the Cap also.

Sam didn’t decide to sit on the director’s chair in just one day itself. It was his year’s of observation and learning from the sets of movies, that gave Sam the courage to be in the position of a director. His observations really paid off in the movie! It’s always great to see those people like Sam getting their chance to express their talents.

The movie Extraction, got its inspiration from the Graphic novel Ciudad by Andre Parks. There were many similarities between the storylines between those two. A mercenary is set to rescue the child of an imprisoned crime lord. But there are also some key differences between the novel and the movie.

The biggest difference is whom the mercenary is set to rescue. In the movies, we can see Chris Hemsworth’s Tyler Rake is set to rescue Ovi Mahajan, the son of the imprisoned crime lord, played by Pankaj Tripathi. But in the graphic novel, the mercenary is tasked to save the daughter of the crime lord. Another difference is that in the graphic novel, both the daughter and the mercenary fells in love with each other. And in the movie, we all know nothing like that happened. Tyler was always protecting Ovi, as a brother. nothing else.

4. Most Scenes weren’t shot in Bangladesh

There is no doubt that most of the incidents in the movie are taking in Dhaka, Bangladesh. But is it actually? Turns out that it’s not! Yes, the majority of the movie was shot in India and Thailand. Not in Bangladesh. The crew was successful in giving the audience the vibe that the story was taking place in Bangladesh. This needs to be appreciated.

It has been officially confirmed by Netflix that this movie has got more than 90 million views in the very first month after release. This movie has thus broken every record since then. Even Netflix was surprised to see the huge amount of recognition the movie got after the release. 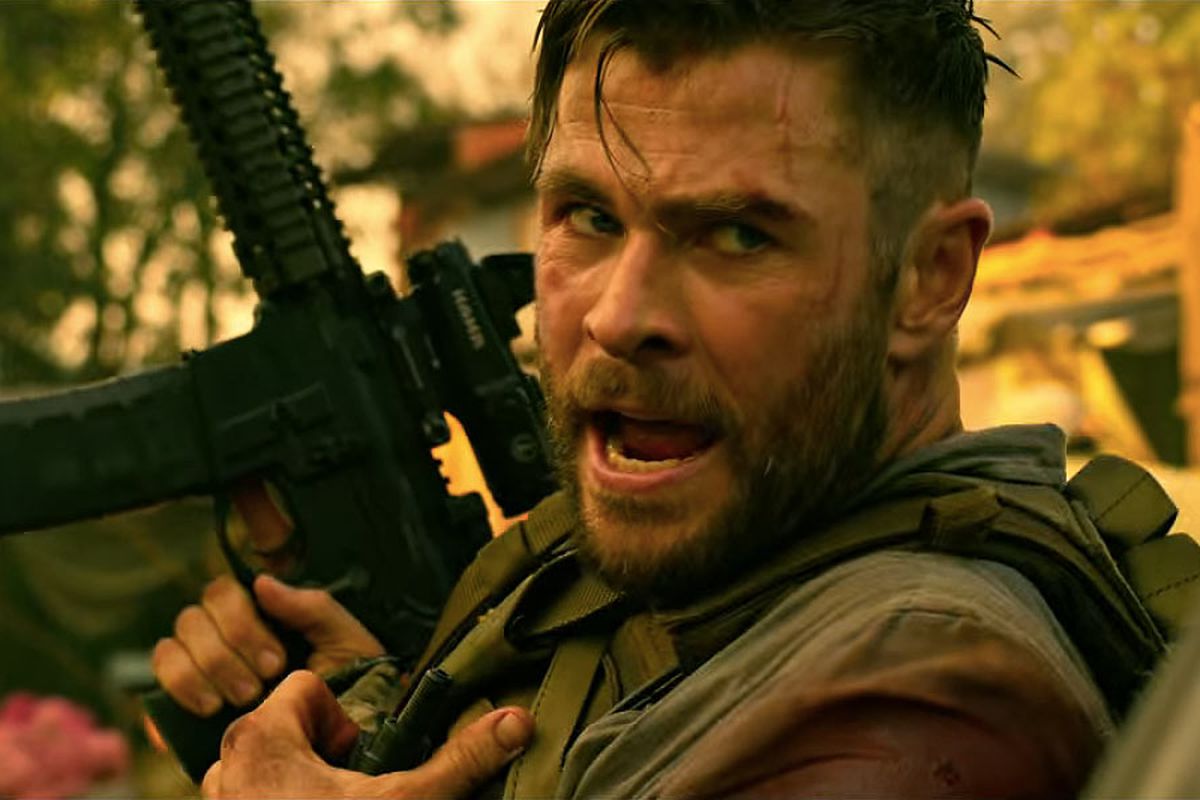 The big reason could be because of the cast and crew of the movie. Chris Hemsworth, the Russo brothers, Sam Hargrave, and all those attention-grabbing factors along with the great cinematography are what make this movie achieve its records.

Sam Hargrave is famous in Hollywood for his amazing works as a stuntman. Sam has been in the industry as a stuntman and as well as an all-round stunt coordinator in almost every Russo-directed Marvel movie. The work chemistry between the Russo brothers and Sam Hargrave has benefitted a lot in their movies together.

This friendship can also be seen in Extraction. When Sam Hargrave decided to make his debut as a director, he decided to do in the script by Joe Russo and under the Russo brothers as the producers. And Sam has done an excellent job with his directorial debut with this movie.

7. The Title of the movie was changed many times

We all know how hard it is to find the title for something. A title is always an important factor to make a good impression on the audience. In this movie, the team was not sure about what name should they gave to the movie. First, the title was Dhaka, which you all know, the place where the story takes place.

But the doubt that the name may confuse many, they changed the name again to Out Of The Fire. But then, they found out that the name was too similar to the movie Man On Fire. Both of these movies also have similar premises. So they changed it again. The team finally landed on the name Extraction and decided to go with it.

8. Priyanshu Painyuli read the contract several times due to disbelieve

The remarkable performance of Priyanshu Painyuli, who played as the main villain boss Amir Asif. When Priyanshu got his contract for the movie he read it again and again as it was unbelievable for him. Who would not love this great cast and crew? For the movie, Priyanshu also took three months to learn the Bangladeshi language for the movie. This was because Priyanshi is an Indian rather than from Bangladesh.

9. The Shot in a Water tank

There is no doubt that Extraction has many impressive scenes. The movie begins with a great show where Tyler Rake jumps from a huge cliff into the water. In that scene, we could see Tyler remain in his meditative state. relieving his past memories. But this shot wasn’t taken inside any pond or river, But somewhere else.

The director Sam Hargrave said that this scene was shot inside a water tank. And Hemsworth will stay in the tank to shoot this scene. What was unexpected is that Chris Hemsworth holds his breath for nearly three minutes. Even Hemsworth forgot to get out of the water as he was so relieved and was in a meditative state while he was inside the water. The team had to constantly remind him that he needs to take breaks at regular intervals.

If you remember the 12 minutes shot by the end of the movie was really a great one. The whole of those shots, which seemed like a one-time shot was very hard to shot. Both for the crew and the cast. Since there shouldn’t be any mistakes happened, as it will reduce the quality of the shots there were many retakes and rehearsals done for this shot. 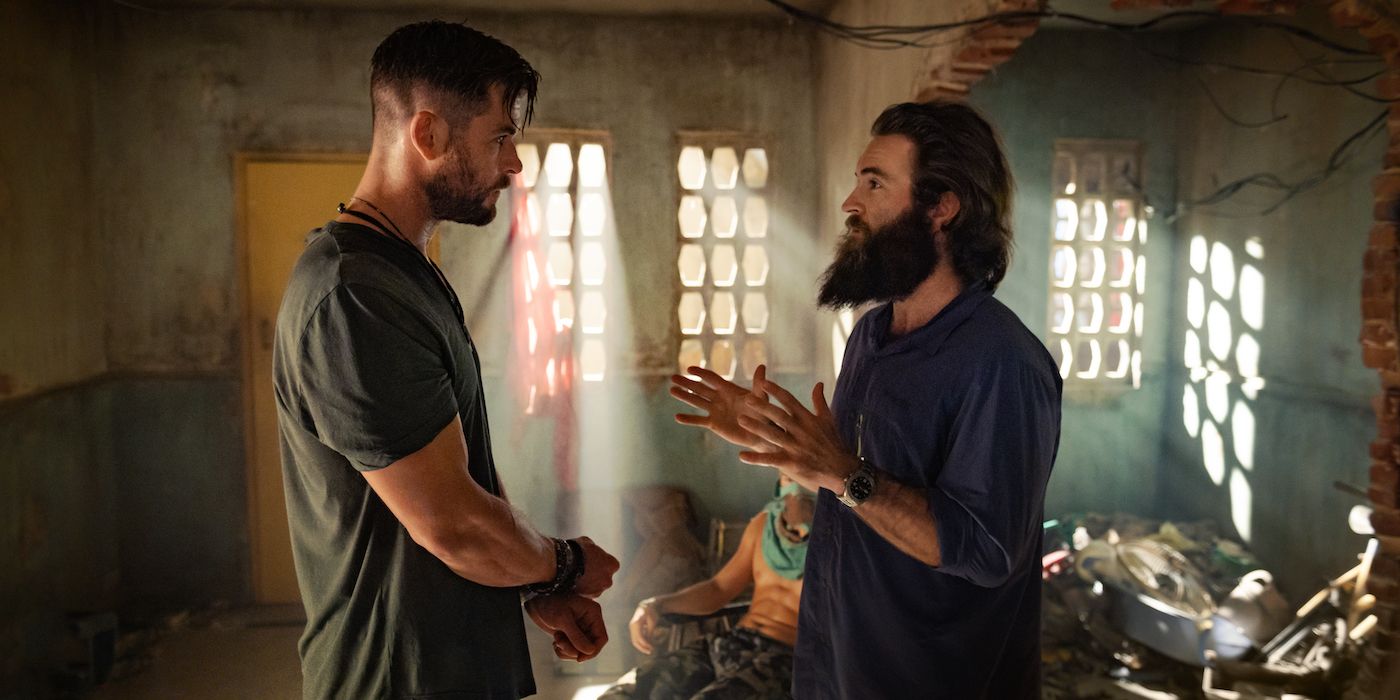 It took nearly 10 days to complete this one take like shot. And it was worth all of that hard work. As this shot is one of the key highlights of this movie, every action movie fan will surely re-watch this scene again and again.

What do you think about our top 10 picks about Extraction? Did we miss any points which you think should be included? We hope that we have given from really amazing facts related to the movie Extraction. Do share your thoughts regarding it.  For all those who haven’t watched the movie, or want to do a re-watch, you can head towards Netflix as this is a Netflix original film.